Achieving success in America after a childhood in India? It’s not too uncommon a story today but was a bit more unique in the 1970s. Arriving in Ohio with only one of two suitcases, M.R.’s host family replaced all the belongings he lost on the bus journey to college. Attending Kent State, he learned to be “American” and at the same time, connect with others from South Asia to retain his ethnic identity.

The simultaneous comfort/confusion of being a resident in a foreign land – and the power of the kindness of strangers has stayed with M.R. throughout his life, resulting in a passion for social entrepreneurship, funding startups, and forging meaningful personal connections. 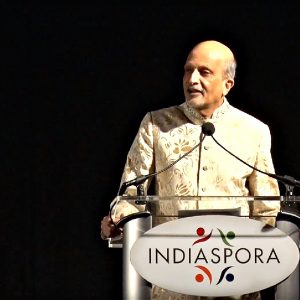 As his career progressed, M.R. was keenly aware that his fellow members of the Indian diaspora were making significant contributions to their industries and adopted homelands. Despite their different professions, religions, and stages of life, these individuals all maintained a special connection to India.

In 2012, again, M.R. set out to unite a far-flung group with common goals. He founded Indiaspora to connect the 3.9 million Indian Americans to other emigres from around the world and enhance their relationship with India. The nonprofit has assembled hundreds of influential members and aims to drive political engagement, community action, and philanthropic impact in their adopted lands and the Indian homeland.

Indiaspora’s annual Global Forum gathers thought leaders from around the country and around the globe to strategize on policy and initiatives.  The group has held presidential galas in Washington D.C. and successfully lobbied for a Diwali U.S.P.S. stamp.  In 2020, the group rallied to provide relief during COVID-19 pandemic, pledge strong support for Black Lives Matter, and produced a Business Leaders List that showcases the influence of the diaspora in a variety of sectors.

M.R.’s early days and those of other successful Indian immigrants are profiled in two books:  Those Immigrants by Scott Haas and The $8 Man by Brenda H. Christensen.

M.R. now shares his life’s experiences and insights through his public speaking engagements. His gratitude came full circle in 2018 when he was invited to deliver the commencement address at his alma mater, Kent State.