Believing in the power of entrepreneurs

M.R. was an “angel investor” before it was a page in every tech entrepreneur’s playbook. Betting the equivalent of a long shot, these financiers provide seed capital for a company existing only on the pages of a Powerpoint and in the minds of a founder or two. 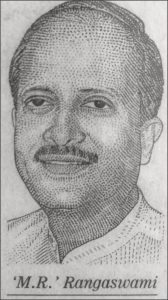 Driven by his pioneering experience as a successful Silicon Valley CMO, he co-founded Sand Hill Group to formalize his support for nascent innovators.  The Wall Street Journal featured M.R.’s “hedcut” sketch on its front page in 1997, showcasing his work as an early angel venture capitalist.

Over the years, M.R. met one-on-one with an estimated 2,500 entrepreneurs to discuss their products and plans, connecting them with his vast global network and access to financing.  The result has been backing for more than 100 companies that grew to raise hundreds of millions in capital and employ thousands of people.

But with big reward comes big risk – and sometimes big losses – a fact of life in innovation investment. At one point, M.R. lost more than half his portfolio and had to regroup, re-strategize, and restart in order to rebuild his stakes.

Owning the wins and the losses shaped his perspective on entrepreneurship and life, serving as the inspiration for many of his public speaking engagements. It also ensured the success of his own ventures, such as the nonprofit SHG Foundation, Corporate Eco Forum, and Indiaspora.